Free School Was Just the People in It 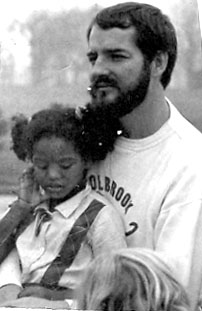 Carrie was a delightful child, but she was a handful. As I recall, she was almost always in somebody's lap. One of the young mothers took this photo on a field trip. She made an 8 X 10 and gave it to me, but I let somebody else have it. I never looked that good, before or since. 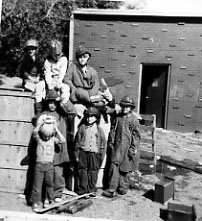 One of the parents taught drama at a nearby university, and sometimes awarded us the old costumes that were being thrown away. Kids would stay in costume for weeks! I think they were putting on their own drama, something about pirates, when somebody snapped this photo. Behind them was a pile of sand left behind by construction workers. Andy named it "Lille Beach!" 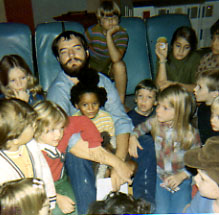 We had no furniture when we moved into the old warehouse on Jackson Street. Somebody, probably one of Eileen Hatcher's friends, gave us all the seats from an old Greyhound bus. The kids loved them because they could charge into them and knock them over in a most satisfying way. I was always opposed to fixed furniture, and insisted that everything be movable.

This is a "morning meeting" scene, where I tried to get everyone to make some kind of plan about what they wanted to do that day. When I was more ambitious, at the beginning, I used the morning meeting to stress academics. I also made it as democratic as possible, so that the children pretty much ran things. It worked out well when we had major problems, because the children were always willing to help. 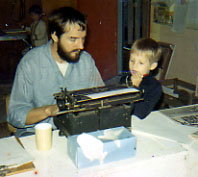 Peter couldn't read at 5, but he authored book after book. He would make up sequences of drawings, then bring them to me in a stack. Then he dictated the story to go with the pictures. A desk stapler then completed the publishing process, and Peter's newest book then went into the shelves. I would love to know what happened to this brilliant child! 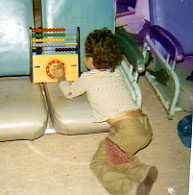 I was big on equipment, and went to great lengths to have teaching gadgets around. My pride, and unfailingly shown to visitors, was a "Language Master" recorder that could be used to teach languages. I made hundreds of sliding tapes for it. I also made hundreds of "Individualized teaching modules," But in truth, those things were used very little. The children created their own devices.

One thing I hoped to teach was music, or at least music appreciation. We soon found out, though, that what the children really liked was commercial jingles from television. "It's the real thing," A Coca Cola song, was practically our anthem! I jacked with the words to try to get something better, but we never transcended TV commercial music! Oddly, one of the students now makes his living in classical music, I think. 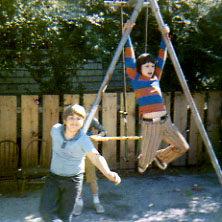 Mostly, they played. Frantically, all day long, they played. In many ways, it worried me, because I was under a lot of pressure from parents, from other educators, and from the public at large to "produce" something comparable to what other schools were doing. Andy (striped shirt) once asked me what he would be doing in mathematics if he were in public school. "Long division," I told him.

Of course, it required addition and subtraction; but he picked up the algorithm in less than two weeks, then helped me teach some of the others. I've often wondered what I might have done if cheap calculators had been available then. Probably, we would have used them.

The point is that children can learn very quickly when they are truly motivated. I don't mean "urged" or "forced" or any kind of external motivation. People learn when they get ready to learn, and it's easy for them. The best part is that there's no overhead in hatred of school subjects, which afflicts most of us who went to regular schools. Nobody at Lille Skole was very good at math, for example, but nobody hated it!

This wasn't just imagination or wistful thinking. There were plenty of studies in the 1960s and 1970s that showed how children could catch up in amazingly short periods. Children with special learning problems, once diagnosed and remedied, would catch up quickly. My favorite story was about Native American children who had lived their first few years wrapped in "papooses." A few weeks after they were unwrapped, they could walk as well as anybody!

As far as I have been able to find out, all the free school children achieved grade level easily when they transferred to the public schools. The panicky parents were a much larger problem than the children!