"Free School" Was a "Movement" in Houston 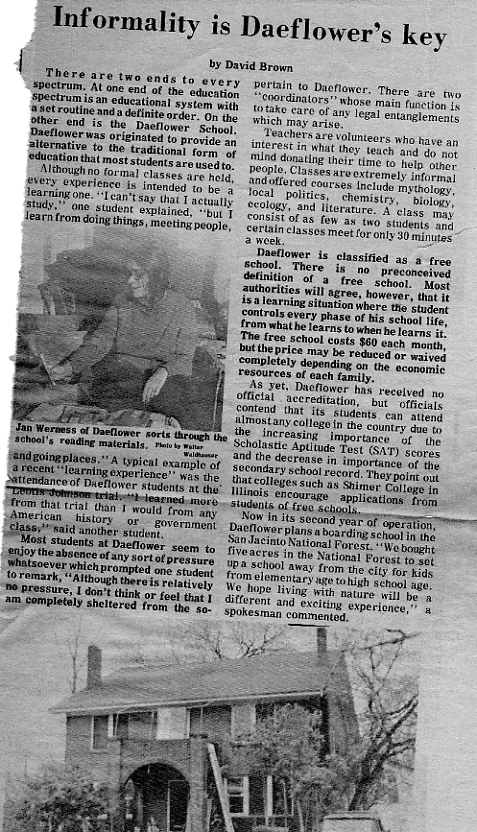 Bottom Caption: Inside this inconspicuous house at 1401 Blodgett lies Daeflower.

There are two ends to every spectrum. At one end of the education spectrum is an educational system with a set routine and a definite order. On the other end is the Daeflower School. DaefIower was originated to provide an alternative to the traditional form of education that most students are used to.

Although no formal classes are held, every experience is intended to be a learning one. "I can't say that I actually study," one student explained, "but I learn from doing things, meeting people, and going places."

A typical example of a recent "learning experience" was the attendance of Daeflower students at the Leotis Johnnson trial. "I learned more from that trial than I would from any American history or government class," said another student.

Most students at Daeflower seem to enjoy the absence of any sort of pressure whatsoever which prompted one student to remark, "Although there is relatively no pressure, I don't think or feel that I am completely sheltered from the so-called real world. I take part in activities pertaining to the community and know about as much as other students do about what is going on around me. When I leave Daeflower, I'll be equal with students from the formal schools."

The term "principal" does not pertain to Daeflower. There are two "coordinators" whose main function is to take care of any legal entanglements which may arise.

Teachers are volunteers who have an interest in what they teach and do not mind donating their time to help other people. Classes are extremely informal
and offered courses include mythology, local politics, chemistry, biology, ecology, and literature. A class may consist of as few as two students and certain classes meet for only 30 minutes a week.

Daeflower is classified as a free school. There is no preconceived definition of a free school. Most authorities will agree, however, that it is a learning situation where the student controls every phase of his school life, from what he learns to when he learns it. The free school costs $60 each month, but the price may be reduced or waived completely depending on the economic resources of each family.

As yet, Daeflower has received no official accreditation, but officials contend that its students can attend almost any college in the country due to the increasing importance of the Scholastic Aptitude Test (SAT) Scores and the decrease in importance of the secondary school record. They point out that colleges such as Shimer College in Illinois encourage applications from students of free schools.

Now in its second year of operation, Daeflower plans a boarding school in the San Jacinto National Forest. "We bought five acres in the National Forest to set up a school away from the city for kids from elementary age to high school age. We hope living with nature will be a different and exciting experience," a spokesman commented.

Although disciples of the formal or old way of learning will classify the Daeflower school as an escape from the reality and pressures of life to the confines of an unnatural world, one Daeflower student called it simply "A place where people can be people."

Even before Lille Skole was opened, I began meeting like-minded people. Art Brady was a nervous young teacher from New Caney, Texas, who wanted to start a High School along Free School lines. After Lille Skole finished our first year, Daeflower was formed. "It's a member of the liverwort family," Art explained the name that the students had selected. He and Jan Werness had wonderful ideas and were quite independent of Lille Skole, although we collaborated often.

Ilene Hatcher, Jimmy Ohmart, and Ronnie Duke soon got involved and Daeflower lasted, I think, two years. Although they had a building as a home base, they were gone as often as not. Once, Jimmy loaded the entire school into an old bus for a long summer's trip to California! While they were gone, I recruited new students for their Fall opening. The Free School Movement, in the Fall of 1971, consisted of Lille Skole, the spin-off (and much more viable) Pearl School, and Daeflower. I helped all of them with fund raising and publicity.

The University of Thought had begun, I think, in 1969 as the brainchild of a Vista Volunteer. Using friendly college faculty and churches, this young genius wove together a series of volunteer classes on everything from gardening to transcendental meditation. The first year burnt him out, and it languished through 1971, when I picked up the reins and re-started it as "University of Thought, Learning Exchange."

As 1972 came around, we had two elementaries, a high school, and a "university" going. None of them had any money. Lille Skole was a total financial failure throughout its second year, and was saved by a donation from one of my fellow graduate students who had a nursery school that had become a burden to her. She gave the nursery school, with 30 or so paying clients, to Free Schools Incorporated. All she got was a tax break, and we got an old station wagon and a chance for financial redemption as a dual free school and nursery school.

The rented property had a double garage, which the older children from Lille Skole adopted as their own. Some of them started doing overnighters in it. I used it for a giant, ongoing weekend rummage sale that was a big source of income. Even though there were few parents willing to pay to keep their kids in a genuine free school, there were still lots of well-intentioned progressives who would volunteer a little time or bring a sack of old clothes for the rummage sale.

I had been working 14-hour days since long before the school opened in 1970. The nursery school ran from 6 AM to 6 PM, and some of the parents would leave their children on the steps even before we could start. Some of them were always late picking up the children. I did all janitorial and administrative tasks, including bookkeeping and dealing with public supervisory agencies.

I still had a full load at graduate school. It had become more than clear to me that I could not gather a base of parents willing to support a genuine replicable free school, but I was looking for broader means of support. I might have been able to continue, had it not been for Laura. 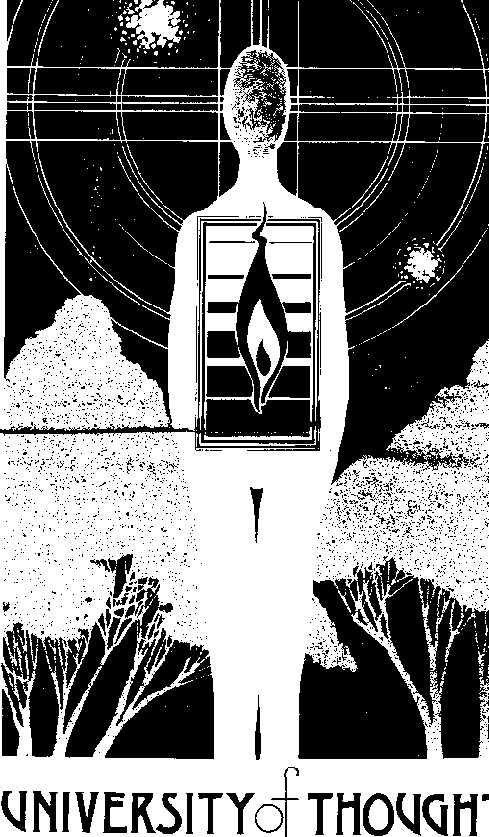